It's not just the younger generation who are demanding companies clean up their environmental act. To attract and retain the best talent across the board, we'll need to get serious about sustainability.

In 2019, the Trump trolling, environmental campaigner 16 year old Greta Thunberg became a symbol of Gen Z and their activist zeal.  Sailing across the Atlantic to address the UN she became the figurehead of a generational fight against climate change deniers and inaction.

What has Greta Thunberg done for you?

The ‘meaning of Greta Thunberg’ and the implications of her crusade was hotly debated.  What did the woke generation want from us? Was it realistic? How should we handle them?  Did they even have the right to ask for change?

Others saw a mounting challenge to the status quo, a clear imperative for governments and businesses to act, not least because gen-Z held their future in their hands.

The message to company bosses from futurists like Keith Coates was ‘clean up your act’, as your future workforce and customers would simply not tolerate employers who were trashing the planet.  Without action on the environment - the talent of the future would not engage with you.

With recent extreme weather events putting climate change centre stage, it seems the environmental concerns of a younger generation have gone mainstream.  Now, it's the politicians and the corporations now who need to catch up with the expectations of workers and follow their lead in delivering on sustainability goals.

Corporations particularly need to stop paying lip service to the principles of the circular economy and replace it with real action, if they’re going to attract and retain the people they need to run their business.

Regardless of age,  it seems there was a new understanding and commitment to environmental goals across the workforce:

Even so, the younger generation were still leading the pack in terms of their commitment to the cause:

Crucially, this is a workforce who want to actively engage on sustainability issues.  They don’t want to sit back and let the bosses make all the decisions. They want to be an active part of the solution themselves.  They are looking for bosses to empower them so they can contribute more:


Workers want to be involved

There is an opportunity here for everyone to be involved in preventing waste and contributing to the 'circular economy'.    And there's been a sea change in employees attitude to these challenges.

A 2013 report by the Carbon Trust said only half the workforce were concerned about their companies use of energy and wanted to help them curb their wasteful practices.  Now we all know the impact our actions in the workplace are having on the wider world and want the authority to make the changes that will count.

Across the working generations there is a sense of the importance of the environmental mission.  And companies who want to retain and attract the best talent will have to have the policies and initiatives in place to meet these expectations.

CSR is a major factor in decisions to join, stay or go

But this movement is also about the social acceptability of working in companies that have poor ethical records.  No matter our age, we want to be proud of the businesses we work for as we spend so much of our lives involved with them.

Added to this, it's now very easy to see online the truth about the murky side of corporations and the negative impact of some of their operations.

And it's this kind of pressure that is causing revolutions in the corporate world. Think about Phillip Morris announcing they do not expect to be selling tobacco products in the future, and calling for the ban of cigarette sales.  The overwhelming evidence of the damage their products have done historically has made workers uncomfortable about sticking around and has ultimately led to a fundamental change in direction for a business conglomerate.

The same thing is happening on a large and small scale with companies and their environmental record - from the big oil, chemical and pharma companies,  to the startups who want to attract and retain the best people to work with them.

Why is CSR so important to young people

But, of course, it is young people who are critical to our long term future.  And they have specific needs and wants related to the companies they work for and their environmental record.

Studies show that young people looking for jobs are drawn to companies that have strong green credentials and policies.

Working in ways that have a positive environmental impact brings a sense of meaning and purpose to their lives that they sometimes feel they lack.

There's a mix of motivations and pressures that are focusing Millenials (and their more radical cousins in Gen Z) on 'the mission' of the companies they're working for,  rather than just the 9 - 5:

What can we do?

To attract and retain the best people, companies should weave the green agenda into their contracts, policies, mission statements and strategies.

Doing this will not only demonstrate commitment to environmental action and global responsibility.  But it will also signal an opportunity for workers to contribute ideas to create more efficient,  innovative and profitable organisations fit for purpose in the modern world.

The Green Business Bureau defines some key steps for businesses serious about reducing their environmental impact, which are really worth thinking about:

The message is, if we can deliver on all these objectives we can inspire the best people to work for us and stay with us. 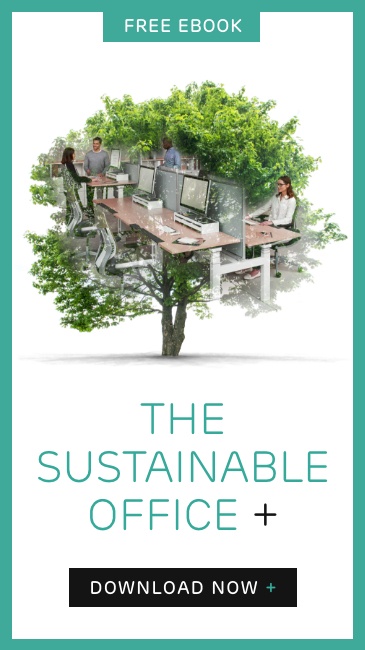 Creating a sustainable office space with IE: 5 ways we can help you +

ESG in the workplace: why it matters now more than ever +

What is a SKA rating and why is it important for a sustainable office? +